Back to all posts

Art or Cash: The Desolation of Critics

*** The article below is from December 20, 2013, and originally on a website that is now called "Legendarium Media: The Fantasy News."  I should preface this new posting with the fact that I greatly enjoyed the first P.J. Hobbit movie, and then my enthusiasm waned significantly with each following release of the movie trilogy.    There was still a lot I enjoyed in the 2nd film, particularly everything to do with the portrayal of Smaug.  Lots to complain about, but also lots that I enjoyed.  I REALLY disliked "The Battle of the Five Armies" - and even fell asleep during my first viewing.   Even so, I've seen all three a million times.  Of course, Martin Freeman's performance is what saved much of the films for me and other viewers.  All of my favorite moments in "Unexpected Journey" were related to Freeman's performance. All three films could have been so much more; such a missed opportunity by the studio and the director.  Still, this old article was more about a response to the critics who were complaining about what it does to Tolkien's legacy - the essence of my response is - "hey look - Tolkien is the one who sold the rights!" ***

The article as it appeared in December 2013:

Originally I was going to title this article “A Massive Metal Model of an Upended Space-Rocket: A Review of the Hobbit: The Desolation of Smaug”; but then I realized it was too long, far too cryptic and I didn’t feel like researching the proper usage of two colons in one sentence with quotes and italics.  I’m much more concerned with traffic, click-through, likes and overall success.  The metal Space-rocket model purists will just have to deal with it and be happy I wrote an article at all.  I mean if you clicked through – it doesn’t matter if you like it or not, you already clicked through.  Of course, you could leave your review of my article below, and we can have a sequel to this article, have you click through again, and we’ll carry on that process as long as you're happy to click through.  Know what I mean, nudge nudge, wink wink…?

And let me further preface this all by saying this article is not even a review, but more of an artist’s “stream of consciousness” that is loosely based on my viewing of the second Hobbit movie.  So please forgive me, this article is not a pure interpretation or adaptation of my viewing experience, but is simply my reaction to the critics based upon that viewing.   If any of the disclaimer above makes sense to you, please let me know as I’d like to buy you a pint sometime.

There was actually a third working title I had considered, “The Back-wash of Watching the Desolation of Smaug at the Elbows of Artists”, as I had the peculiar honor of watching the film between two of my favorite artists; Jef Murray and Ted Nasmith.  How can Varda align the powers to create such a scenario you ask?  Well, such is the epic setting designed by the masters of Mythmoot II; the annual gathering of the Mythgard Institute. 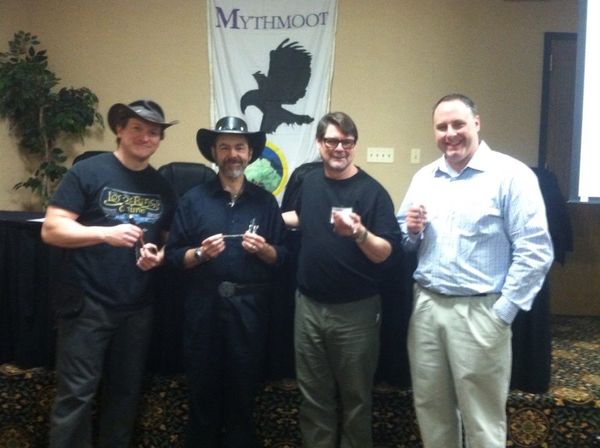 Fellowship of the Wee Scarvies at Mythmoot.
This group has discussed Tolkien a few times…

If you had the pleasure of attending this meetup in Middle-earth, you understand just how inspiring such a gathering of loremasters can be.  There were, of course, many passionate discussions of the films all weekend at the convention.  In the photograph above you will note the author in the LOTRO shirt, Jef Murray, Ted Nasmith and Dr. Corey Olsen (The Tolkien Prof.).  If you enjoy examining Tolkien from all possible angles I highly suggest you read Prof. Olsen’s book Exploring J.R.R. Tolkien’s The Hobbit. And many Tolkien fans are sadly unaware that you can get a masters degree in “Tolkien Studies” through the Mythgard Institute.

But lets get back to the sleeping dragon and, conveniently related,  another convention that happened in 1957;  the 15th World Science Fiction Convention.

“The back-wash from from the Convention was a visit from an American film-agent (one of the adjudicating panel) who drove out all the way in a taxi from London to see me last week, filling 76 Sandfield with strange men and stranger women – I thought the taxi would never stop disgorging…They have apparently toured America shooting mountain and desert scenes that seem to fit the story.  The Story Line or Scenario was, however, on a lower level.  In fact bad.  But it looks as if business might be done.  Stanley U. & I have agreed on our policy: Art or Cash.” – J.R.R. Tolkien, Letter #202 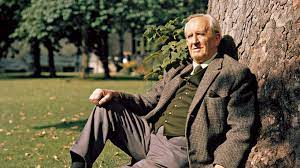 The deal didn’t work out, but from Tolkien’s letter above, all purists and critics should understand that Tolkien himself was ready to sell his work for either buckets of mithril or artistic control.  In other words the art was very important to him, but it could be compromised for enough coin.  This is the way of the world.  If you want the pure milk, you still have the books.   Lets have the professor clarify further from the same letter;

“Either very profitable terms indeed; or absolute author’s veto on objectionable features or alterations.”   So there you have it from Tolkien himself; Cash or Art.  In fantasy laymen’s terms, if there was enough cash involved, Tolkien would put up with the flying Bombur-barrel river rodeo, Dwelfs (future offspring of Kili & Tauriel), or perhaps even Jar Jar Gollum.

“Hold on Sons of Durin, we’re going to defy all laws of physics and kick orc-tail all at the same time! Kili – hold on to your trousers! Bombur – prepare barrel armour mode! That shield-surfing elf can’t touch this!”

With Sir Peter’s versions of the Tolkien tales I daresay we have Art AND Cash.  Perhaps not the Art that Tolkien would have agreed to, but art nonetheless.  For all the bunny sleds, trouser jokes, beardless dwarves, 3D decapitations and Bombur barrel-armour, there are plenty of beautiful moments and moving paintings of Middle-earth in all of the films.   Is it the Hobbit film that the majority of Tolkien fans and scholars would have made? No it is not. And I daresay that Sir Peter is in danger of alienating many of his core Tolkien fans with this desolation of mood.  Off all the casualties of this film, it is the ‘mood of Tolkien’ that suffers most.  Thank the Valar for Martin Freeman as he is an anchor to the films that deserves much more screen time and general acclaim.  His portrayal of Bilbo is spot on and by himself burgles back the worth of the film.

With Tolkien’s above quote in mind, I can only chuckle at the oft heard critical rebuke of “cash grab”.  I was totally entertained and enthralled by the spectacle of a high budget, quality fantasy film, and so were the notable artists at my elbows.  We were all able to suspend our disbelief for that brief time, enter a fantasy adventure, all the while knowing our beloved novels were still waiting at home to be enjoyed in their intended fashion.  Many more thousands of blessed movie goers will now read The Hobbit, than if the movies had not existed, and above all, I am thankful for that.  Ticket sales will reveal if Sir Peter has also appealed to the legions of movie-goers who would never voluntarily touch a book.

And yes, of course I would absolutely LOVE to see a true-to-the-books film made.  I do believe it is possible to adapt to film and stay very close to a book; perhaps suffering the loss of philistine viewers and studio treasure troves.   I very much enjoy Sir Peter’s Tolkien inspired action adventures, even if they depart greatly from the original texts.  I know the controversy will continue, probably to the benefit of ticket sales, but for now I will let this dragon go back to sleep.

Please feel free to post your thoughts below. But I warn you, if you bore me, I shall take my revenge.